The first local dissemination event for stakeholders from Greece was organized by the Region of East Macedonia and Thrace (REMTH) on the 13th of November 2019, at Galaxy Hotel Kavala.

The main topics of the event included a general presentation of the project DACIAT BSB-461, the current status and anticipations regarding the inland fish farming, fisheries in the Greek lagoons and indicators of biological integrity, prospects and opportunities for micro and macro algae cultivation in the Region of East Macedonia and Thrace, prospects for the cultivation of bivalve mollusks, problems and suggestions for the management of lagoons and freshwater of REMTH, Greek fish farming and sustainability, as well as sustainable development, innovation and blue entrepreneurship.

The event concluded with a session of questions and answers.

On the 19th of March, 2019, the project partners participated at the Regional Blue Growth Seminar – Towards a Common Maritime Agenda for the Black Sea that was organized with the help of the European Commission and the BSEC PERMIS (Permanent International Secretary for Economic Cooperation at the Black Sea). The Seminar was divided into 6 interactive workshops that had questions & answers sessions. The participants received files with information about the Blue Economy in the Black Sea area, emphasizing the objectives as well as the results that are meant to be achieved.

The event was an opportunity to discuss relevant aspects regarding the development of the aquaculture and the fisheries areas, by finding new solutions to the problems encountered in these areas, by identifying new ideas that have been successfully implemented in other countries and may work in our country as well. After a brainstorming session, new ideas that could fulfill the objectives of the Blue Growth concept have emerged.

At this event, during Panel 5 – Sustainable fisheries and aquaculture, the Lead Partner presented the project and its expected results in order to promote the project and create further synergies with other projects.

On the 21st of March 2019 the opening conference of the DACIAT project took place. The event was hosted by Karadeniz Technical University, Faculty of Marine Sciences and it had a number of 150 participants.

Within the conference, the project was presented and each partner summarized their individual activities throughout its implementation. The state of aquaculture and fish processing in the Black Sea was another main topic of the conference. 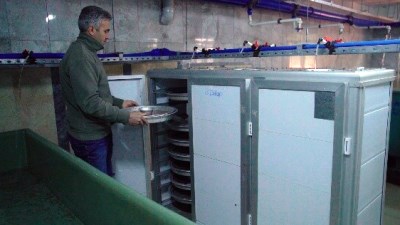 The event ended with a Questions and Answers session and a media conference including interviews with each partner of the project.

After the opening conference of the project, the partners attended a study visit that was organized by the Karadeniz University in Trabzon. The visit started at the university’s headquarters, where the participants visited the research center for aquaculture that consists of a reproduction system for sturgeons, trouts and turbots. 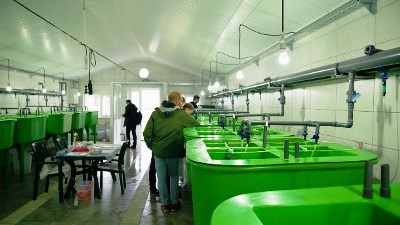 Next stop was at an aquaculture farm that the Turkish state operates, which aims to support the breeding and developing of new species of trout for different fish farmers in the area, as well as for the bigger farms.

The second to last visit was near a reservoir where detachable nurseries could be seen, cages with 5 to 16m diameter that could hold almost 25tones of fish each.

The last stop was at the aquaculture cages that were found at sea, where the fish remains until it reaches the proper size for selling, according to each buyer’s preferences.

On the 12th of April, in Tulcea the General Assembly of the Balkan and Black Sea Commission took place, an international event focused on maritime and transport affairs that gathered representatives of both public and private sector from the Conference of Peripheral Maritime Regions (CPMR). Within the Workshop on Blue Growth, as a driver for cooperation in the Black Sea and the Danube and the experience from other sea basins, the ACTEDJ team had the opportunity to present the DACIAT project’s objectives, estimated results and synergies with other initiatives. The event set up allowed the ACTEDJ team to interact with other stakeholders that are involved in the aquaculture sector, creating the bases for development of DACIAT follow up activities that will ensure the sustainability of the project’s results.

The first local dissemination event for stakeholders from Ukraine (representatives of fish farms and major sellers of fish products in the city and district, local authorities, etc.), organized by the Agency for Sustainable Development and European Integration “Lower Danube Euroregion”, took place on June 27th, 2019, at Bessarabia Hotel in Izmail.

The presentation of the project with its objectives and expected results, as well as activities planned during the implementation of this project was made at the dissemination event. The representatives of fish farms and representatives of major sellers of fish products of the city and district were invited to the event. The main challenges faced by the aquaculture business and top-level changes that are needed for business in this area were discussed.

The first local dissemination event for stakeholders from Romania – Tulcea, 28 May, 2019

The first local dissemination event for stakeholders from Romania was organized by Danube Delta National Institute for Research and Development on May 28th, 2019, in Tulcea at the headquarters of the institute.

The agenda of the event included the project’s presentation (with its objectives and expected results, as well as activities planned during the implementation), the presentation of the Aquaculture Virtual Centre of Competences and a presentation about the evolution of the aquaculture in the Danube Delta. The meeting concluded with a session of questions and answers.

Promotional materials regarding the project were disseminated.

The first local dissemination event for stakeholders from Turkey – Trabzon, 29 May, 2019

After opening conference of the DACIAT project on 21 March 2019, the local dissemination event was the opportunity to give specific information about the project to the targeted audiences. After giving brief information about the project consortium, objectives, expected results and activities during the implementation period, stakeholders had the opportunity to express their expectations to increase aquaculture production, trade and public consumption as well as to increase export quantities. It was a very good occasion to bring all stakeholders to look for solutions to the existing legal, administrative and technical problems in the area. All participants expressed their willingness to provide their contributions to the project to support aquaculture industry and increase production and export. On the other hand some of the companies declared that they are ready to collaborate with investors from other partner countries for joint investments in production and trade.

Joint Operational Programme Black Sea Basin 2014-2020 is co-financed by the European Union through the European Neighbourhood Instrument and by the participating countries: Armenia, Bulgaria, Georgia, Greece, Republic of Moldova, Romania, Turkey and Ukraine. This website has been produced with the financial assistance of the European Union.

The contents of this publication are the sole responsibility of Danube Delta National Institute for Research and Development and can in no way be taken to reflect the views of the European Union.

This website was made with the support of the European Union.